We will elucidate the core regulatory mechanisms for synaptic transmission and finally address the fundamental question, “How does our brain physiologically function and how is the system disrupted in brain diseases?”. We have focused on the regulatory mechanisms for AMPA-type glutamate receptor (AMPAR) as AMPAR plays a central role in learning and memory formation. Based on our specific and quantitative biochemical methods, we discovered AMPAR regulatory proteins: the DHHC palmitoylating enzymes, ABHD17 depalmitoylating enzymes and the epilepsy-related ligand/receptor, LGI1/ADAM22. So far, we have elucidated the physiological functions of these AMPAR regulatory proteins and the implication in the pathogenesis of brain diseases such as epilepsy and limbic encephalitis, by developing new methods to screen the palmitoyl enzyme-substrate pairs, to quantify the palmitoylation stoichiometry and to specifically visualize the palmitoylated protein, and by integrating many methods such as super-resolution imaging, mouse genetics, and electrophysiology. We will elucidate the molecular basis in which these AMPAR regulatory proteins regulate synaptic plasticity and cognitive functions of mouse and human brains using the following our developed or cutting-edge approaches and resources. 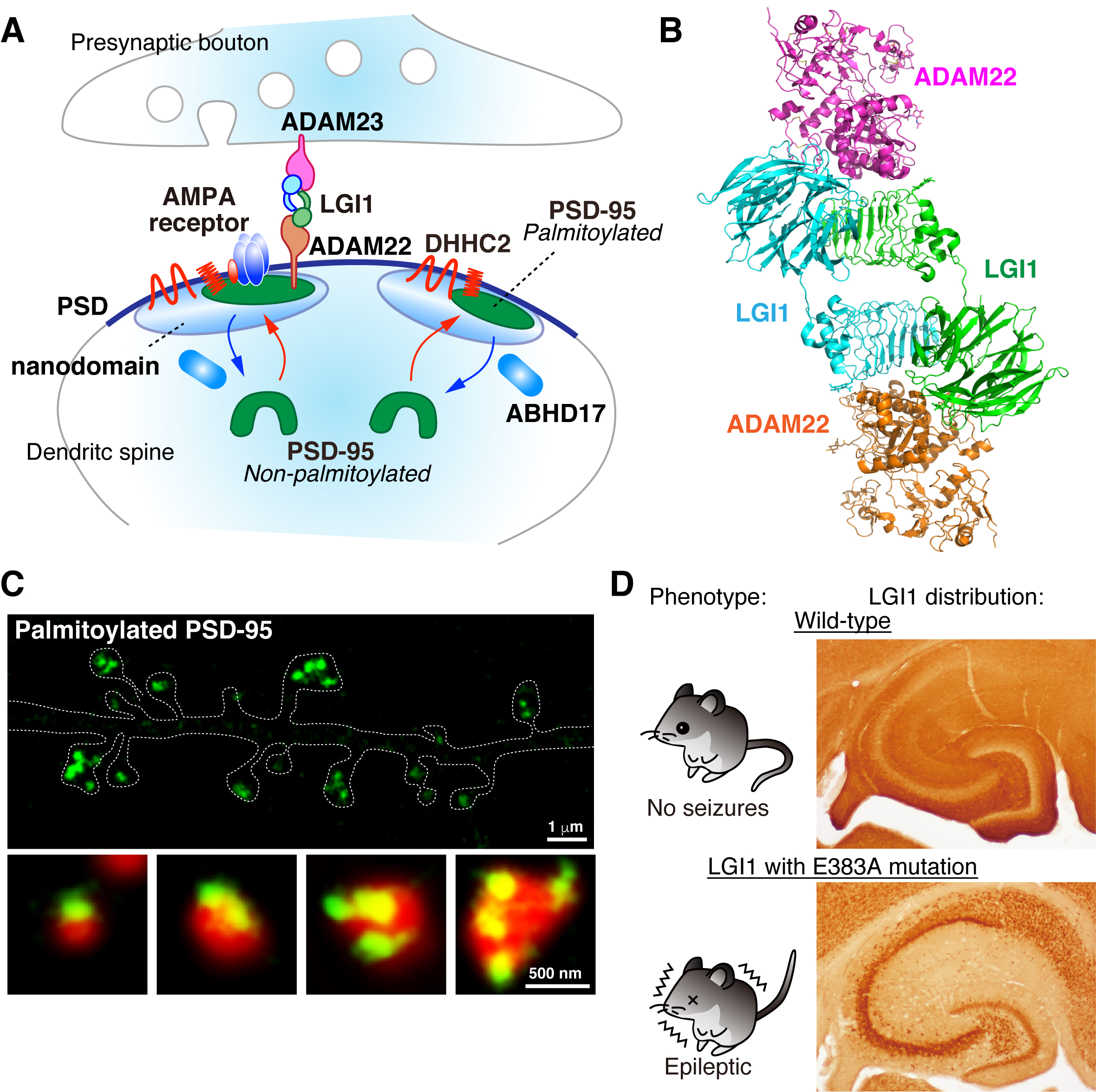 Figure (A) Unique AMPA receptor regulatory proteins: DHHC palmitoylating enzymes, ABHD17 depalmitoylating enzymes and the epilepsy-related ligand/receptor, LGI1 and ADAM22. (B) X-ray crystal structure of the LGI1-ADAM22 dimer-of-dimer complex. (C) Discovery of novel postsynaptic nanodomains by palmitoylated PSD-95-specific probe and super-resolution microscopy: a synaptic DHHC protein locally regulates the formation and reorganization of nanodomains. (D) Generation and analyses of mouse models of human epilepsy with the LGI1 mutation: Distribution of wild-type LGI1 and the E383A mutant protein. This LGI1 mutant protein is misfolded, retained in the ER and does not bind to its receptor, ADAM22.

Introduce a researcher of NIPS.