Extracellular signal-regulated kinase 1/2 (ERK1/2) that belongs to a subfamily of mitogen-activated protein kinases (MAPKs) plays diverse roles in the central nervous system. Activation of ERK1/2 has been observed in various types of neuronal excitation, including seizure activity in vivo and in vitro, as well as in NMDA-receptor (NMDA-R)-dependent long-term potentiation in the hippocampus. On the other hand, recent studies in cultured neurons have shown that NMDA-R stimulation could result in either ERK1/2 activation or non-activation, depending on the pharmacological manipulations. To assess NMDA-R-dependent regulation of ERK1/2 activity in vivo, here we examined the effect of NMDA-R-induced seizure activity on ERK1/2 activation by using rat cortical slice preparations. NMDA-R-dependent seizure activity introduced by Mg2+-free condition did not cause ERK1/2 activation. On the other hand, when picrotoxin was added to concurrently suppress GABAA-receptor-mediated inhibition, profound ERK1/2 activation occurred, which was accompanied by strong phospho-ERK1/2-staining in the superficial and deep cortical layer neurons. In this case, prolonged membrane depolarization and enhanced burst action potential firings, both of which were much greater than those in Mg2+-free condition alone, were observed. Differential ERK1/2 activation was supported by the concurrent selective increase in phosphorylation of a substrate protein, phospho-site 4/5 of synapsin I. These results indicate that NMDA-R activation through a release from Mg2+-blockade, which accompanies enhancement of both excitatory and inhibitory synaptic transmission, was not enough, but concurrent suppression of GABAergic inhibition, which leads to a selective increase in excitatory synaptic transmission, was necessary for robust ERK1/2 activation to occur within the cortical network.

1. Cortical slices were used for electrophysiological and ERK1/2 activation analyses.
2. NMDA-R activation by omission of extracellular Mg2+ did not cause ERK1/2 activation.
3. Additional strong excitation by GABAA-R blockade was necessary for ERK1/2 activation.
4. Network-level analysis is important to understand activity-dependent ERK1/2 regulation in vivo. 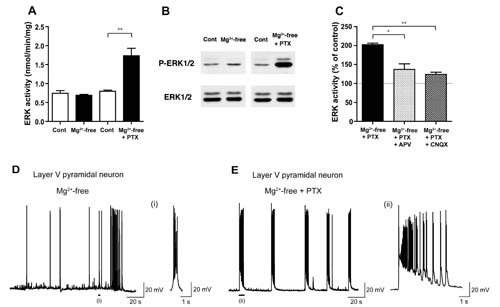